The table below shows the changes in exports in HK billions between 2009 and 2010. Summarize the information by selecting and reporting the main features, and make comparisons where relevant. Write at least 150 words. 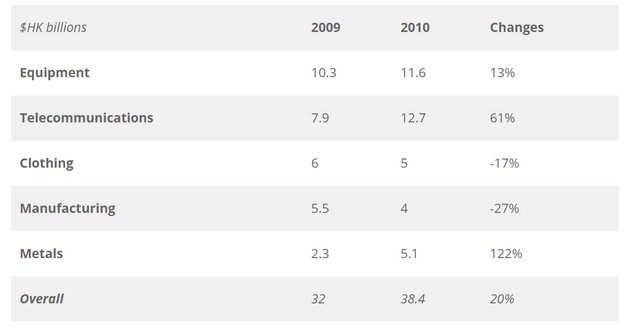 The table illustrates the changes in exports of five different sectors from 2009 to 2010. Overall, Metals Industry is the leading exporter with major changes and on the other hand Manufacturing Industry is a least exporter with negative changes between 2009 and 2010. The data are predicted in Dollar HK Billions.

To start with, Equipment, Telecommunications and Metals sectors depicts the increase in exports which are accounted for 13%, 61% and 122% respectively between both years. While Clothing and Manufacturing sector shows decline trend in the exports with -17% in Clothing and – 27% in manufacturing respectively.

Furthermore, overall we can see that in the year 2009, which is accounted for 32 HK Billions dollars exports while in the year 2010 which is accounted with 38.4 HK Billions dollars exports which comprise of overall 20% changes in exports take place from 2009 to 2010. In 2009, Equipment Industry was the leading exporter with 10.3 HK Billion dollars, while in 2010, Telecommunication is the highest exporter with 12.7 HK Billion dollars compared to other sectors.