There has been a humongous increase in the garbage. What do you think are the causes of increased garbage and what method do you suggest to reduce it.

In most of the world, humans are producing the ginormous amount of litter – both industrial and domestic and due to this, waste management has become one of the pressing issues nowadays. Through the industries, solid and liquid wastes are being produced that adversely affect the environment. This essay will outline the causes of the proliferation of rubbish and adequate solutions in the forthcoming paragraphs.

The first reason is the psychological attitude of the people. Nowadays. People have the normal tendency of aggressive materialism and so they are obsessed with but the things which are usually not necessary. In other words, we have turned into a materialistic and mass-consumption society where we use more and throw away more than ever before. Another reason is the dearth of appropriate landfills and incineration sites in many areas. For example, it can be seen large leaps of garbage near slum area where the residents are accustomed to throwing the rubbish anywhere due to the of the designated dustbins causing many environmental issues including respiratory problems. Besides, a lack of recycling system also contributes a significant role in the growing intensity of these solid wastes.

To tackle these issues, people should be educated to avoid extravagant expenditure on unnecessary consumables via educational programs or environmental campaigns. In addition to this, the government should identify the controlled landfills in each city and also should construct the incineration plants so that garbage can be collected effectively. Moreover the establishment of recycling units where solid trash items can be sorted out and reused again. For example, every ton of newspaper recycled saves approximately 17 to 19 trees. At the household level, an important step is composting which has two major benefits of reducing wastes going to landfills and produces a free natural fertilizer to build up healthy soil.
To sum up, solid waste generation and waste management has become a menace to human beings and can be dealt in many ways by the combined efforts of Individuals and governments both.
Sample 2
It is a fact that in this Morden society it is generating the amount of rubbish and West bus west management is one of the issues for developing and developed countries. There are several reasons for such a situation and also few visible influences too. Both aspects are explained next paragraph.
To begin with, The first and foremost reason is the escalation of the global population because nowadays seven billion people are living in the world but after the next 5 to 10 years the number of people expected about 10 billion. The other justification is that the number of manufacturing companies is built bu people and the government to fulfilling the public demand. By this means the amount of rubbish was produced by industry for instance plastic companies are produced by raw material after rejected some usefulness plastic, damage plastic, and other unnecessary things and also plastic cannot be recycled.
secondly, There are hung numbers of solutions to reduce garbage. First of all, the government should create street rules for use paper made bag than a plastic bag because the plastic bag cannot be recycled. what is more, the Government should organize some seminars for using a recycle thing and also media awareness to people for reduced garbage and also telecast on their channel which is the drawback of garbage. Municipal corporations should collect recycled things and recycled them.
Taking everything into account, It can be finally commented that the amount of garbage is increasing continues Hence we are should follow government rules and also research how to reduce it.
Sample 3

Due to numerous factors, pollution has taken the next step towards Global Warming, one of the many reasons is the growth in the garbage. This essay illustrates the effects of giving rise to rubbish and their possible solutions.

In day to day life, people might encourage the increase in garbage knowingly or unknowingly. Non-Biodegradable waste plays a significant role here. For instance: plastic, industries create it in a monstrous amount daily, as it has become critically important. Although it is much efficient it is highly non-biodegradable which gives rise to an enormous amount of waste. It might take a few decades for some plastic to get purge. Apart from plastic, there is metal scrap, tin cans, medical waste and many more, responsible for expanding garbage.

Unawareness of people towards mother earth is highly hazardous. Campaigns should be established to the coach about 3R’s(Recycle, Reuse, Reduce). Law must forbid the excessive use of plastic, also it would be helpful to have a  fine system. Industries need to come up with a way, to dispose of their waste systematically. For instance, a company like Coca Cola must not use the plastic bottle on a large scale. They can fill up tin cans, glass bottles which can be Reuse and Recycle easily.

As long as society despises taking a step forward for a clean and healthy environment nothing could change. Although it is said that “difficult roads often lead to beautiful destination”. To develop a watch full eye towards the safety of the environment to reduce the garbage which will eventually lead to the healthy surrounding. 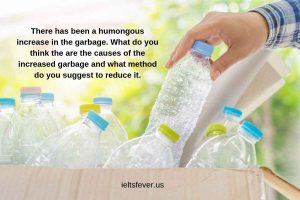 There has been a humongous increase in the garbage. What do you think are the causes of increased garbage and what methods would you suggest to reduce it.?

In many parts of the world, the increasing amount of litter has become a major menace for the citizens and its government. There are numerous reasons which contribute to making the garbage situation worse. This essay will outline certain causes with adequate solutions, and some examples will also be discussed further below.
There are many reasons for the production of garbage. First of all, from my point of view, one of the main reasons for increasing rubbish is, overly purchase habits of people. Often, people nowadays tend to buy more than they need. It is very clear and obvious that whenever there are promotions, the sales volume will increases. As a result of that, people buy items that will not be used for some time and it will then be thrown away. Therefore the volume of rubbish is Second reason for this is growing urbanization and prosperity. The more financially strong is the country or the city, the more garbage it will produce. It can also be seen by linking poverty and prosperity, competence and inefficiency.
However, there are some considerable solutions that governments could do to resolve the issue. Firstly, governments should make a clear regulation about limiting the usage of plastic bags and bottles. For example, governments could give tax incentives to retailers who reduce the usage of plastic bags and replace them with recyclable paper bags. Secondly, they could also make campaigns to society about the negative effects of plastic bags and bottles on the environment. Campaigns could be made in the form of posters, short video clip or even a documentary film which can be easily accessed by the public. Furthermore, people have to be more careful about waste dumping and taking responsibility for waste recycling. By considering these soluble solutions, it is hoped that garbage production will decline in the future.

To conclude, unless we make a conscious effort, it will not be possible to reduce the amount of waste produce.