The bar chart below gives information about five countries spending habits of shopping on consumer goods in 2012. Summarise the information by selecting and reporting the main features, and make comparisons where relevant. 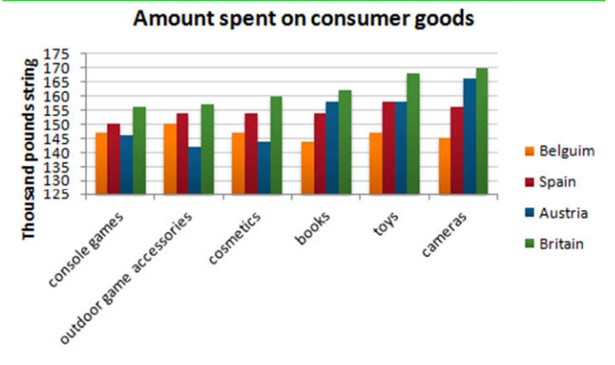 The bar chart illustrates five different countries spending habits of shopping on five varieties of consumer goods in 2012. Overall, Britain is the highest leading country in spending money on all five market goods compared to the other four countries. The data are calibrated in a Thousand-pound string.

In Books goods, money spent on shopping this item by four different countries, which is increasing in increasing order starting from lowest to highest spending of amount, first Belgium and then second Spain and then third Austria and Fourth Britain which is accounted with 145, around 155, around 160 and above 165 thousand pound string respectively.