Nowadays more people are choosing to socialize online rather than face to face, is this a positive or negative development?

Needless to say that social networking wreaks havoc not only on elders but also on youngsters. However, its positive characteristics outweigh the negative aspects. This essay is going to outline its positive and negative angles before coming to the final recapitulation.

To pinpoint the paramount plus point of socializing online is that it helps people remain in touch despite having a busy lifestyle. For instance, now both men and women are working, they are unable to spend time with their loved ones. So through online apps, they can drop messages to each other and ask about their well-being. These apps have also made the world a small place while sitting at home one can communicate with their family members living overseas via video calls. These live capturing calls make them feel as they are talking face to face. Another rationale that hauls me to the patron is that these apps help to bring different countries and states together. To illustrate, through Facebook and twitter people of different religions and castes can be connected, by interacting with each other they can get to know about their culture and traditions which makes their bonding strong. Moreover, these days individuals are more likely to be active on Facebook, Instagram, and Twitter. Any incident that happened at a particular place gets viral within a second on these apps. So, instantly people can get to know what is happening around the world the same day. Earlier, dwellers used to be aware of any news the following day through newspapers.

Besides good facts, it also contains a darker side. No doubt online socializing has broken the barriers among people, but it brings a gap between real relations. Now, persons are always seen chatting with online users rather than people sitting beside them. Adolescents too are seen engaged on mobile phones playing games. They do not like to fall into their grandparent’s company and the biggest drawback of it that they are deprived of getting moral values. The rearmost coherent factor to be considered which cannot be neglected that nowadays teens are occupied on mobiles which not only diverting them from concentrating on their studies but also affecting their eyesight and health. To uphold my notion, I would quote an instance as both the parents are working, they cannot stop or keep an eye on their children’s tasks.

To recapitulate, I reiterate that there are innumerable strong factors supporting that social apps have affected the people positively. However, its contrary can be controlled. Consequently, I firmly say that it is a positive development. ADVERTISEMENT There has been a humongous increase in the garbage. … 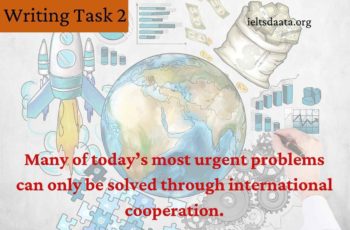 ADVERTISEMENT Many of today’s most urgent problems can only be …