Alcohol-Related deaths in Different countries. Summarise the information by selecting and reporting a description of the correlation of the table that follows. Write at least 150 words. 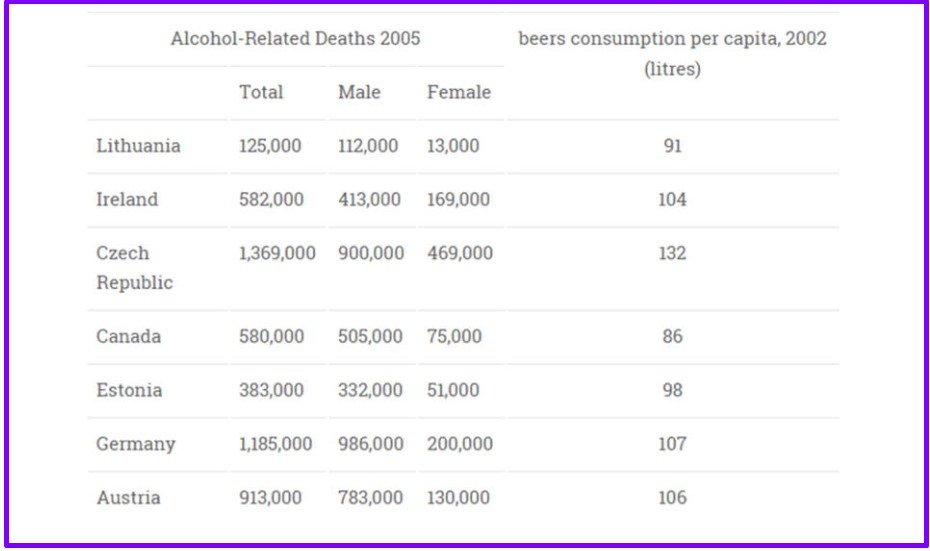 The table illustrates statistics about seven different countries alcohol-related deaths in 2005 and consumption of beer in 2002.

Overall, it can be seen that a large number of people in the Czech Republic and Germany have died due to alcohol consumption, and both regions have consumed more litres of beer during the two years. Death from alcohol intake was more prevalent among men than that of
women.

In detail, average beer consumption in the Czech Republic was the highest in 2002, 132 litres per person, and the alcohol-related death count was also the maximum in this country in 2005. Around 1.37 million Czechs died from alcohol-related complexities in 2005, and 0.9 million of them were men. Per capita beer consumption in Germany, Austria and Ireland were almost similar, 107, 106 and 104 litres respectively and death tolls from alcohol intake in these countries were also higher. Around 1.1, 0.91, and 0.58 million people from these countries departed due to their alcohol issues, and the number of deceased males was significantly higher than that of females. The lowest beer intake could be observed in Canada, 86 litres per person in a year, but the number of

Canadians died from the alcohol-related problem was higher than that of Estonia and Lithuania. 125 thousand Lithuanians died of alcohol-caused problems, of which only 13000 were females.