The graphs show changes in the spending habits of people in the UK between 1971 and 2001. Write a report to a university lecturer describing data. Summarise the information by selecting and reporting the main features, and make comparisons where relevant. Write at least 150 words. 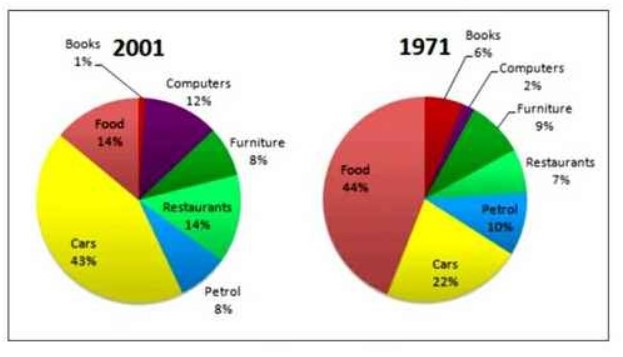 The charts illustrate data about the proportion of habits to spend money on British civilians’ various categories in 1971 and 2001.

In general, most of the spending by UK residents was on cars and food, whereas a budget for books and computers was less than any other expenditure.

As is presented in the chart, in 1971, the most spending habit of people was on food, 44%, while the proportion of the car in this category had half fewer rates than it, about just more than two-fifth.

Books, restaurants, and furniture were approximately similar, just less than a one-tenth, but the expenditure on petrol by people was exactly 10%.

Concerning 2001, the proportions of the car and restaurants were almost double after 3 decades, 43% and 14%, respectively. Petrol and Furniture both had a similar trend after 30 years, whereas the spending on books decreased by 5% and food drop by 30%. Computes expenditure by British residents increased by almost 6 times more in the year 2001.

Also, Read A Beachfront Area in Australia Between 1950 and Today