The average prices per kilometre of clothing imported into the European Union from six different countries in 1993 and 2003 are shown in the bar chart below. Summarize the information by selecting and reporting the main features, and make comparisons where relevant. 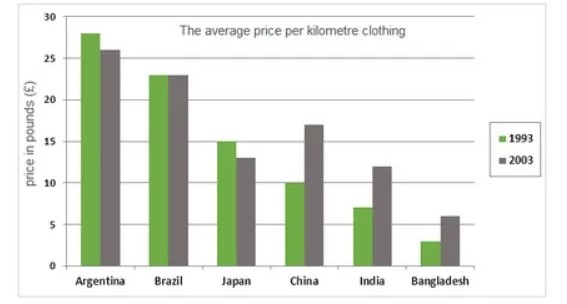 Sample Answer of The Average Prices Per Kilometre of Clothing Imported Into the European Union From Six Different Countries in 1993 and 2003.

The given graph reveals data regarding the average price( pound ) of fabric which was exported from Argentina, Brazil, Japan, China, India and Bangladesh, and sent into European Union in 1993 and 2003.

With regard to non-Asian countries, as a comparison between 1993 and 2003, there was a marginally less price gap in Argentina’s fabrics, accounting for almost 28 and 26 pounds, respectively. Following this, in Brazil, the year 1993 the price was almost 23 pounds, and the average price had not been changed after a decade, in 2003, it was 23 pounds.

Turning to Asian countries, in Japan, the average price of the clothes per kilometre stood at 15 pounds in 1993 after 10 years the price was declined slightly to 13 pounds. According to the figure, in the most populated countries China and India, the mean price of fabrics that were imported into the European Union amounted to 10 and 7 pounds, respectively. Furthermore, in 2003, both countries, China (17 pounds) and India (13 pounds) had experienced significant changes in the garment’s business. In the last, geographically small country Bangladesh had a low price of clothes in both year 1993 and 2003, constituting 3 and 6 pounds, respectively.

All in all, clothing exported from six countries among them Argentina had a higher price and Bangladesh had lower price compare to the other 5 countries.