The bar chart below gives information about five countries’ spending habits of shopping on consumer goods in 2012. Summarise the information by selecting and reporting the main features, and make comparisons where relevant. Write at least 150 words. 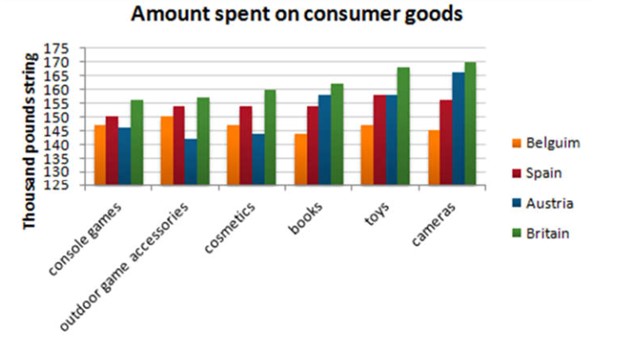 The bar illustrates the statistic of five countries expends on consumer goods in 2012.

Overall, Belgium experienced a downward trend while Britain showed an upward trend throughout the sell-out funds of consumer goods. Although Spain initially had the lower rate and exceeded Australia.

Australia fills the same cost in toys and cameras with 153 pounds each. At the same time, Spain leads 154 pounds in cosmetics and books. In the given figures Spain and Australia put the same sum on toys. However, Belgium holds a reasonable fee in obtaining the toy whereas Britain is purchasing with the highest quantity.

Also read: The Bar Charts Below Provide Information About Percentages of Students Who Are Proficient